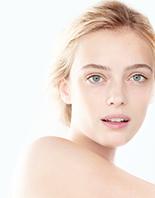 Your skin has redness and scales on the oily areas of your face: edge of the scalp, eyebrows and between the eyebrows, nasolabial folds, nostrils and chin. This phenomenon is accompanied by mild itching on the skin's surface. This is caused by the proliferation of a micro-organism called Malassezia furfur.